This is a short ‘reflection’ by Dr Geoffrey Copland about some key issues and themes for HEI governors to consider. These include ethics, composition of GBs, key relationships; risk; internationalisation and governance failures. 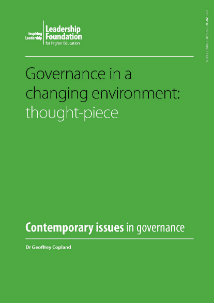 Summary
This project was initiated by the Leadership Foundation for Higher Education with the aim of investigating the current issues and developments of concern to governing bodies.

In conducting this research, interviews were held with a number of people, eight of whom were existing chairs of governing bodies drawn from across the sector, eight were heads or former heads of higher education institutions (HEIs) and six others were individuals with significant experience of higher education governance, including some university secretaries. Less formal discussions were held with a number of other people with experience of governance in the higher education sector, including existing independent, staff and student governors.

The interviews and discussions from this project largely took place in 2013. During the interviews the author explored the interviewees’ perceptions of the existing strengths and weaknesses of current governance structures and practices, significant changes in the environment in which higher education operates and their thoughts about potential changes and the impacts these might have on governance. These included the impact of devolution on higher education and the policy divergences appearing between England, Scotland and Wales.

The interviews discussed the size, composition and operations of governing bodies, the areas which caused particular concern to the interviewees, the roles of staff and student governors, the processes for decision making, risk, international and technological changes. We considered areas of risk, ethics and issues that could lead to failures of governance.

It should be noted that this was a review of governance as it was at the time - and that changes have arisen since publication.

The materials published on this page were originally created by the Leadership Foundation.