The impact of Athena SWAN on Humanities Departments

The Athena SWAN Charter was established in 2005 “to encourage and recognise commitment to advancing the careers of women in science, technology, engineering, maths and medicine (STEMM) employment in higher education and research.” The Charter has been managed since 2007 by the Equality Challenge Unit (ECU, now part of Advance HE). In 2015, following an independent report that demonstrated its impact as “a catalyst for change, leading to organisational and cultural transformation that makes a real difference for women and enables all staff to achieve their maximum potential” the scheme was extended to arts, humanities, social science, business and law (AHSSBL) subjects.

By early 2018, around 25 applications from the arts and humanities had secured a bronze award: 60% at school level and 40% by departments. Many resubmissions and new applications are in train, with numbers likely to increase significantly in the future. Informal exchanges and wider commentary have revealed variable experiences of Athena SWAN in the arts and humanities, and divergent perspectives on its value as a vehicle for advancing gender equality and organisational change. This project aimed to systematically gather, analyse and explain such views, and to identify which institutional contexts, working practices and interventions are most conducive to advancing gender equality through Athena SWAN. Through sharing these insights in a written report and infographic, it intends to promote an Athena SWAN community of practice, and provide practical assistance to Athena SWAN applicants and their institutions. 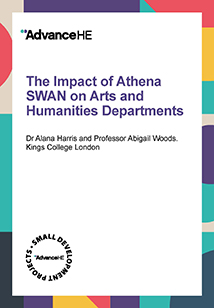 The materials published on this page were originally created by the Leadership Foundation.