'20 years an NTF': some reflections

05 Dec 2019 | Prof Mick Healey Mick Healey is a consultant in higher education at Healey HE Consultants and Emeritus Professor at the University of Gloucestershire. He was one of the first National Teaching Fellows when the scheme launched in 2000. He says becoming a NTF can have a significant effect on the future career of recipients and their students, colleagues and institutions nationally and internationally.

Being awarded a National Teaching Fellowship (NFT) was a ‘sliding doors’ moment in my career, on a par with obtaining my first academic job, successfully defending my PhD, and being made a Professor. I have often wondered what would have happened if I had not been made an NTF.

Changing networks and communities of practice

In the first few years of the NTF scheme, award winners were given £50,000 to undertake a project. I proposed examining the embedding of Scholarship of Teaching and Learning (SoTL) in disciplines and institutions—a hopelessly over-ambitious project, but thankfully it was treated as an award not a grant. This provided me with the means to buy myself some time and visit numerous people and institutions in Australasia, North America and the UK, who were doing interesting things in the SoTL arena. Crucially, the award gave me the confidence to make links with SoTL leaders around the world. This new community of practice gave me the encouragement and opportunities to change career direction.

Expanding beyond my discipline

The case for excellence in my NTF application was based on my experiences as a geographer and the impact I had on my students, colleagues and the geography community. Following the award, though I continued to work in the geography community, particularly in my roles as Senior Adviser for Geography in the Geography, Earth and Environmental Sciences Subject Centre, and Chair of the International Network for Learning and Teaching Geography in Higher Education (INLT), I increasingly addressed issues across the whole of higher education. These included linking research and teaching, embedding SoTL, developing an inclusive curriculum and active learning. 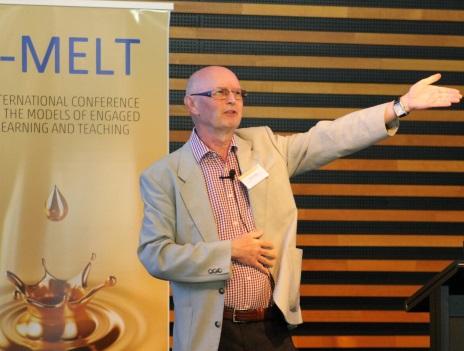 I began presenting at national and international teaching and learning conferences, such as the International Society for SoTL (ISSoTL), for which I was an inaugural member and the first Vice President for Europe. This shift was recognised when I was offered a series of Visiting Professorships and related roles, first at Napier, Queensland, Newport, and University College Cork, and later at Macquarie, McMaster and UCL. Success in obtaining major grants from ESRC’s Teaching and Learning Programme (Improving Disabled Students Learning, led by Mary Fuller) and HEFCE’s Centres for Excellence in Teaching and Learning initiative (Centre for Active Learning, co-led by Carolyn Roberts and myself) cemented this trend. By 2010 my identity had changed from being a geographer to an educational developer and researcher. In the same year I became co-editor of the International Journal for Academic Development.

Creating opportunities for others

My enthusiasm for the NTF scheme led me to be a founding member of the Association of National Teaching Fellows (ANTF) and a mentor for successful NTF applicants. In my own institution I played a central role in selecting and supporting future NTF applicants. By 2010 Gloucestershire had more NTFs, relative to its size, than any other university.

I have developed resources, including several bibliographies and collections of case studies, and a guide on ‘Applying for an NTF this year, next year, sometime’, which have been downloaded over 70,000 times. Profiling other scholars’ work by capturing short sharp examples of practice has become my signature pedagogy. These both legitimatise and spread teaching as professional practice in higher education.

Another initiative, which has supported colleagues, is the International Collaborative Writing Groups about teaching and learning in higher education. This began in geography through the INLT and was then adopted by ISSoTL and has become a signature feature of both organisations.

Enhancing the quality of learning and teaching

The driving force throughout my career has been to enhance the quality of learning and teaching, among my students and colleagues in geography, and since the award of the NTF in higher education within and beyond the UK. Making a practical difference has been my prime aim.

Dissemination is key to making a difference. Seven publications with Advance HE and the former HEA have played a critical role. Four of them are in my Top 10 Cited publications (each cited 350-700 times). Six involved different aspects of developing the teaching-research nexus through engaging students in research and inquiry, all but one of which were co-authored with Alan Jenkins.

My shift in direction has been inspired by the opportunities which opened up for me with the National Teaching Fellowship. Further changes of emphasis have occurred since becoming an independent researcher/consultant in 2010.

The topic which has taken up most of my time in recent years has been the development of student-staff partnerships. This began with a keynote I gave at the 2012 ISSoTL conference, followed by an HEA publication in 2014 (co-authored with Abbi Flint and Kathy Harrington) - one of the most cited publications in the field. This interest stimulated me to propose that McMaster University launch an annual International Students as Partners Institute and the International Journal for Students as Partners, for which I am currently senior editor. It is run on partnership principles and co-edited by students and staff from six countries.

In the last 18 months, Kelly Matthews, Alison Cook-Sather and I have been preparing an article and a book on ‘Writing about learning and teaching in higher education’. Our aim is to support experienced and new staff and students to contribute to existing and new conversations about learning and teaching through a diversity of genres from empirical to reflective pieces and refereed journal articles to blogs. Writing is key to making a difference; and helping others to write is an important way of giving back to the community.

After 20 years as an NTF, much of my attention is concerned with how to make a sustainable impact. Co-authoring, co-designing and co-researching with staff and students is important, as is mentoring and advising. In 2000 my younger daughter, Ruth, aged 17, was at the ceremony where I received the award. I was immensely proud when 17 years later I was at her NTF award ceremony—the only parent and sibling to receive this award. We now write, run workshops and present keynotes together, perhaps the ultimate sustainability strategy!

With the benefit of hindsight, I think that becoming a National Teaching Fellow was one of the most significant events in my professional career, and through the changes it stimulated one that has, I hope, had a positive impact on the quality of learning and teaching.

Applications for a National Teaching Fellowship 2020 close on Wednesday 18 March 2020. Institutions can nominate up to three individuals for the award. Find out more.

Share your #NTFSis20 story with us on Twitter and join the Advance HE Connect group especially for National Teaching Fellows.