The third year of a longitudinal study commissioned by Advance HE tracking women’s work experience in higher education is published today.

Onwards and Upwards? Tracking women’s work experiences in higher education builds on the learning and development Advance HE has achieved with its Aurora leadership initiative for women and those who identify as a woman. 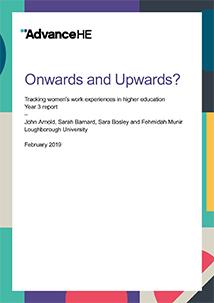 Aurora is a unique partnership bringing together leadership experts and higher education institutions to take positive action to address the under-representation of women in leadership positions in the sector. Over the past six years, 5,895 women from over 175 institutions across the UK and Ireland have participated in Aurora.

In this study, over 2,000 Aurorans were surveyed at different stages of their Aurora ‘journey’.

Key findings from the Year 3 report include:

“It’s really pleasing to see that Aurora and Athena SWAN are helping individual and collective efforts by women in the sector to make inroads to change in overcoming the challenges and barriers to career progression Over the past six years, 5,895 women from over 175 institutions across the UK and Ireland have participated in Aurora, and I’m delighted that the evidence over the whole longitudinal project so far is very positive, highlighting that Aurorans more likely to gain promotion having been on the programme.

“Institutions, through governance, leadership, policy and practice are making the cultural shifts to support women in their career progression too, but there remains some way to go, particularly where BME staff are concerned. We look forward to working with the sector and individuals to step-up the pace of change.”

Tracy Bell-Reeves, Advance HE Director of Programmes and Events.

Details of the five-year longitudinal study, including the full Year 3 and Summary reports, which is led by a team of experts from Loughborough University, are here.

Join the 2019-20 Aurora programme and get a 15% Earlybird discount if you book before 31 July. Find out more here.