Angela O’Sullivan (AO’S): I’m so pleased that Advance HE is moving the Teaching and Learning conference online, so many other events and conferences I was booked on have been cancelled or postponed to 2021. The only problem is our workshop is very ‘hands on’ and I’m not sure how it could work without the delegates being able to do the activity.

Leisa Nichols-Drew (LND): I agree, the conference is very timely and offers useful opportunities during the Covid-19 situation. This could be a useful opportunity for us to try new methods of engagement.

Julia Reeve (JR): Yes, this is a creative challenge for us: how to create a playful, reflective experience virtually?  We want to retain the imaginative feel of our original workshop and create a memorable, thought-provoking experience for delegates.

AO’S: The plan was for the workshop to be very visual though so it might work as an online presentation.  We could film the demonstration of the activity ourselves and then film all the scenarios we planned for the day. This way everybody could see what happened in each group.

LND: Perhaps we could involve the audience as if they are participating in the lab – film it from their perspective? How about including opportunities for reflection after each video?

JR: Mapping out the online presentation as a storyboard will help us to create a narrative structure and will help us to consider how to integrate all the elements: videos of scenarios, reflective prompts and the perspectives of different learners. 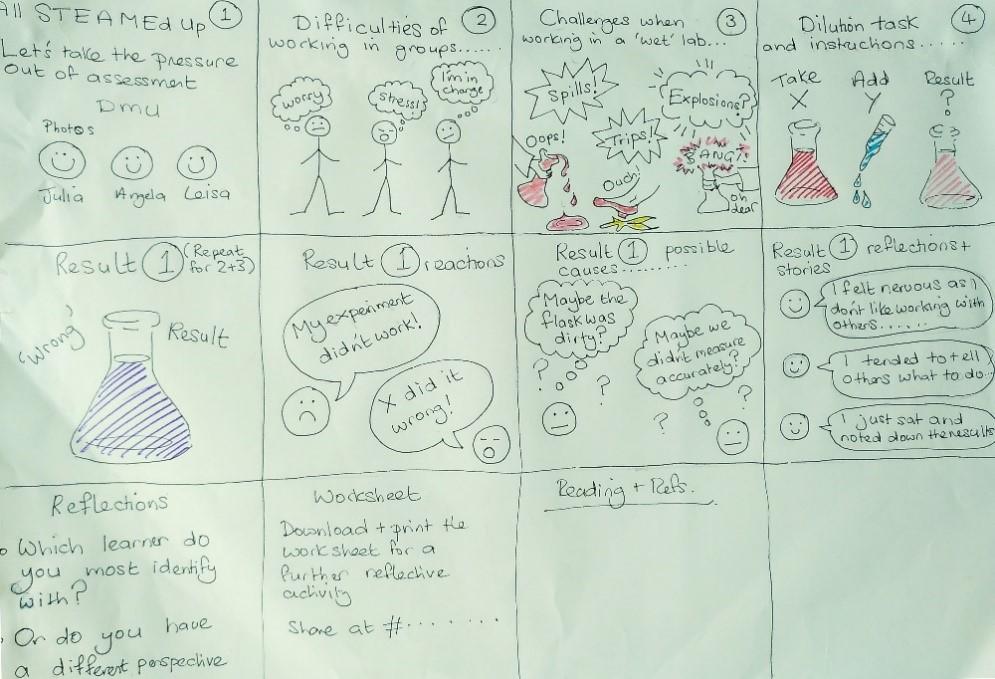 AO’S: I need to add red cabbage and clear plastic cups to my click and collect order. I’ve already got some vinegar. So, I’ll extract the purple/blue pigment from the red cabbage with hot water and then do a serial dilution. The plan was that one group would have one of their containers contaminated with vinegar which turns the pigment pink and another with an anti-acid dissolved indigestion tablet which turns it blue, but I can just set this up and film it.

LND: This is a superb idea! If we have three different outcomes in the videos these could represent the types of student experience in laboratory sessions.

JR: Yes, this will give delegates the sense of being involved in the experiments!

AO’S: Oh yes, and we were going to knock someone’s over on the day, well, I can just spill it myself!

LND: Yes, and if we offer the audience three possible reactions/responses to each video … the audience could choose which one they relate to?

JR: Great idea, this will build in an element of reflection, prompting the delegates to consider their own responses to working with others.

AO’S: That’s a great idea, the different characters could watch their ‘partner’ performing the serial dilution. Brilliant suggestion – each Lego person being a different personality with their own issues and learning style.

LND: I agree, and if the Lego character were to be linked to the colours of the chemical reaction this will assist the viewer (audience). I could create comments from each of the characters (blue, pink, purple… this could really involve and immerse the audience in each video).

JR: Yes, the Lego figures work well: they link to the fact that we had planned to use the storytelling aspects of Lego Serious Play as part of our hands-on workshop, and create a playful atmosphere. Using the available Lego bricks, we can try to make the characters as generic as possible and name them by colour rather than any specific learning approach. 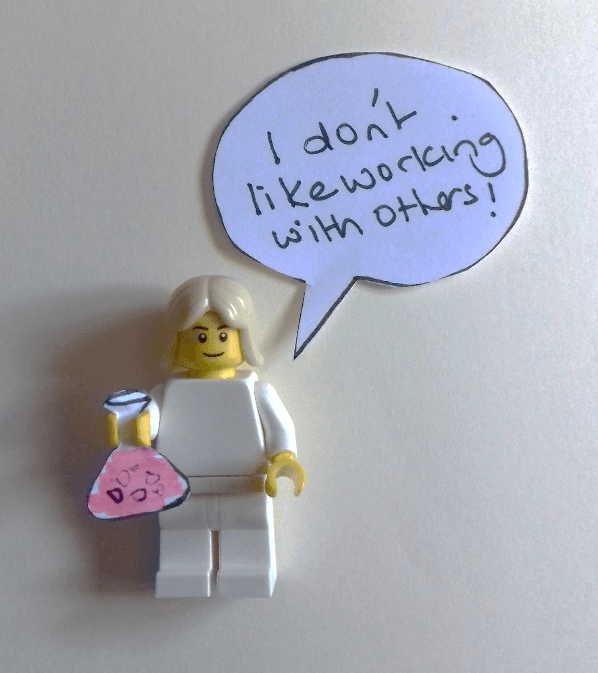 AO’S: When you watch it back it’s difficult to believe we put it all together remotely!

LND: An unbelievable piece of work, what with the remote meetings and each of us having ownership for an aspect, it has given me a new perspective for trying new methods for resources.

JR: Yes, it’s also been a valuable learning experience in terms of getting to grips with Premier Pro software in order to combine the different elements together!  The format we have created could easily be adapted for other learning contexts and disciplines.

View All STEAMEd Up: Let's Take the Pressure out of Assessment delivered virtually at the Advance HE Teaching and Learning Conference 2020 in full

AO’S: What an amazing conference experience, all the benefits of a conference without the stress and expense of travel. The key note speeches were some of the most powerful speeches that I have heard live with strong themes of inclusivity, belonging and genuine kindness. The great thing about conferences is that they are excellent networking opportunities but sometimes you run out of time to see all the posters or you want to be at two parallel sessions at the same time. This online conference enabled you to see everything available at your own pace and personally, I actually felt that I was physically there because it was so immersive.

LND: This was a first for me, attending an online conference using a virtual platform. It actually made me feel like I had opportunities for networking, by clicking to access visits to the poster area and exhibitor zone. There were really impressive presentations that had been pre-recorded and uploaded, which covered topics including: STEM, mental health and closing the BAME performance gap. The whole event was entirely flexible, as the conference delegates could attend what they wanted, when they wanted, a true refreshing outlook. Sometimes, I am rushing to catch a train so I seem to miss a talk, however, this engaging conference has offered a novel approach in enabling access for one month after the conference date.

JR: The conference platform was really accessible and easy to navigate, and it was great to be able to dip in and out of different sessions. The keynotes were exceptional: I especially enjoyed Bugewa Apampa’s presentation on ‘The Pursuit of Meaningful Learning’ with her emphasis on compassion, empathy, equity and fun. 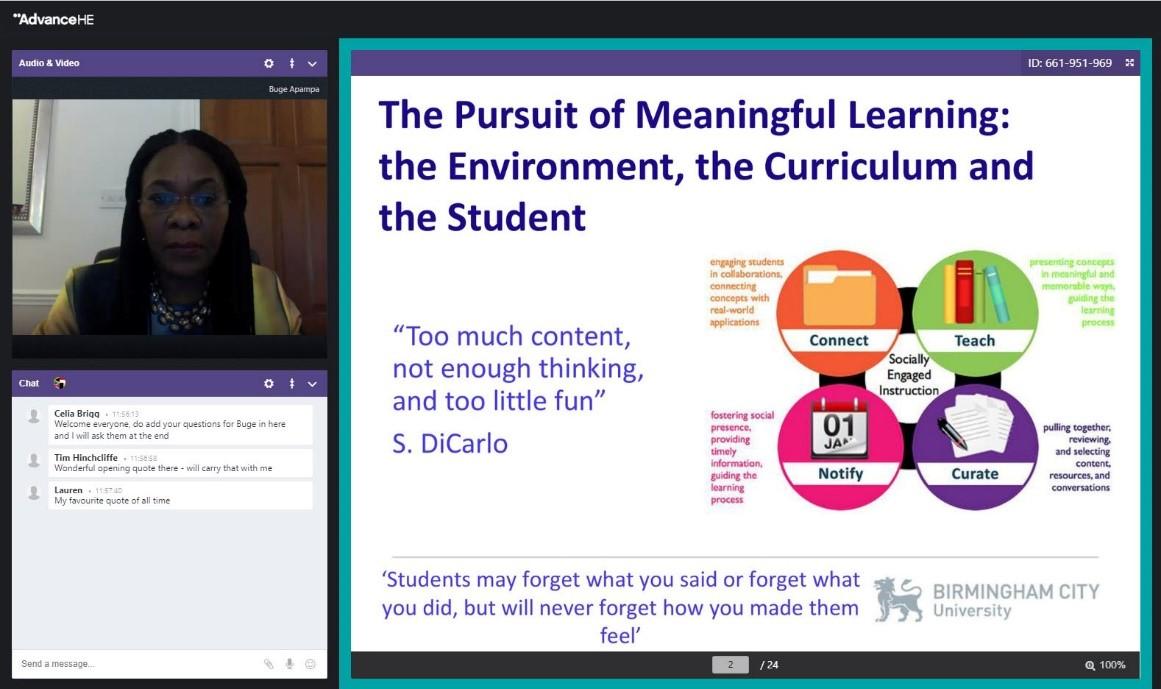 JR: I also appreciated the fact that the on-demand presentations were available for 30 days following the conference: I often find that there is too much to take in on one day at conferences, and I really enjoyed taking my time to watch presentations after the conference ended.  Having the presentations available as shareable YouTube links was also really helpful, enabling me to share those that particularly resonated with me via social media.

Angela O’Sullivan is Professor of Inclusive Practice in Teaching and Learning and Head of Widening Participation in the Faculty of Health and Life Sciences, De Montfort University, Leicester. She champions inclusive practice and is passionate about widening access, raising aspirations and overcoming barriers for disadvantaged groups to progress to higher education. She is a National Teaching Fellow (NTF) and her work in developing engaging ‘hands on’ outreach was recognised with an Advance HE Collaborative Award for Teaching Excellence (CATE).

Julia Reeve is a DMU Teacher Fellow based in Library & Learning Services and works across disciplines, building confidence and creative thinking via imaginative, sensory learning including Lego Serious Play. Her background in fashion design informs her teaching philosophy, which combines a constructionist ‘Thinking with the hands’ approach with compassionate pedagogy. She is particularly interested in emotional aspects of learning, and her pedagogy focuses on the development of self-awareness and empathy, supporting social connection and wellbeing through playfulness and creativity. Her most recent publication: “Talking to myself: reflections on Reframing” considers using creative practice within STEM.

Leisa Nichols-Drew is a Senior Lecturer in Forensic Science and DMU Teacher Fellow. Leisa is proud that her work in embedding forensic science in outreach contributed to the CrashEd 2018 spotlight winning CATE team at DMU (led by Professor Angela O’Sullivan). Additionally, she is a 2018 Churchill Fellow, 2019 National Teacher Fellow, and 2020 Chartered Forensic Practitioner. Leisa is passionate about forensic science Teaching and Learning, especially in developing novel and engaging approaches, that are inclusive for varied learning styles and abilities. During the Covid-19 pandemic, Leisa has collaborated with two other NTFs Associate Professor Rachel Bolton-King (University of Staffordshire, also a CATE winner) and Professor Ian Turner (University of Derby), to launch an online webinar series #RemoteForensicCSI to help create a community of best practice for forensic science educators within FE, HE and practice.

Find out more about next year's Teaching and Learning Conference 2021: Teaching in the Spotlight: What is the Future for HE Curricula? and the open call for papers

In response to the impact of Covid-19 on opportunities for face-to-face learning, teaching and assessment on campus, blended, hybrid and online learning approaches, Advance HE has developed a suite of support for institutions including Active Digital Design and Teaching Skills Masterclasses. These aim to help institutions to develop curricula fit for the 'new normal' and to provide staff with the tools and skills to deliver teaching in this flexible environment. Find out more