The long, hard road to multi-culturalism

17 Sep 2020 | Stephen Crowe As part of the Scottish Funding Council (SFC) project to tackle racism in Scotland’s colleges and universities, Stephen Crowe from the SFC introduces what ally-ship can look like using his own personal experience of growing up in a culturally diverse area of Bradford.

I was brought up in inner-city Bradford and went to Drummond Road Middle School. The school was later made famous by the Honeyford affair, a racial controversy that began with an article written by the school’s head teacher, Ray Honeyford, and published in the Salisbury Review. In the article, "Education and Race", Honeyford argued that schools were only about education, and had no duty to promote multi-culturalism.

Drummond Road Middle School was 95% Asian at the time Ray Honeyford wrote his article in 1985. Drummond Road itself was a long thoroughfare with back-to-back houses leading down to Drummond Mill, a huge 19th century textile mill that closed in 2002 and burnt down in a spectacular fire in 2016.

Even before Ray Honeyford took over the school, its blindness to the cultural and religious differences of its pupils was ingrained in its walls as deeply as the soot from the mill chimney. It wasn’t an unhappy school but neither was it enlightened and, arguably, it missed an important chance to sow seeds of racial understanding amongst the younger population of Manningham. Manningham was the setting for racial riots in 1995 and again in 2001.

It wasn’t as if the school was unresponsive to its surroundings. In Geography we learnt about millstone grit, the Pennine sandstone that defines Bradford as much as granite defines Aberdeen. We knew all about the nearby Wool Exchange, where Bradford’s most famous son, JB Priestley, once worked, and we knew that the other local mill, Listers, made the velvet curtains that hung in the White House.

What we (the White working class pupils) at Drummond Road School never knew was anything at all about the Punjab or Kashmir where most of our Asian schoolmates’ parents had come from. We certainly didn’t know they’d come to Bradford in the 1960s to help keep mills like Drummond’s and Lister’s in business. We knew nothing about the food they ate, the languages they spoke or the places they went to worship. The assumption was that they came to school to become more like us.

The great thing about being a 10 year-old school kid at Drummond Road was that we were united by a deep disinterest in millstone grit, JB Priestley, and who made the curtains at the White House. We didn’t like school dinners, the long walk home up Whetley Hill or the wooden horse they made us jump over in PE. Whatever the tensions were outside the school gates, they didn’t affect us in the classroom – and some of the credit for that should go to the teachers.

But what they - or more accurately, the system – couldn’t do was to use all the diversity we had around us to bring our learning to life; and to do it in a way that would have helped us make sense of the world in which we were being brought up. Alongside the Pennine stone, the literary icons, and the exported textiles we could also have learnt about mountains, maharajas and Kashmiri music. The lemon curd and cheese sticks of Mrs Jennings’s domestic science lessons could, sometimes, have been samosas and chapattis. We could have been taught about the partition of India and the refugee crisis and about their impact on the streets we’d be passing on the walk back home.

What stopped that happening was the idea that education and multi-culturalism were somehow irreconcilable. Ray Honeyford’s article set the tone from its first sentence: “The issues and problems of our multi-racial inner cities are frequently thrown into sharp relief for me.” Define something as a problem and it soon becomes one. 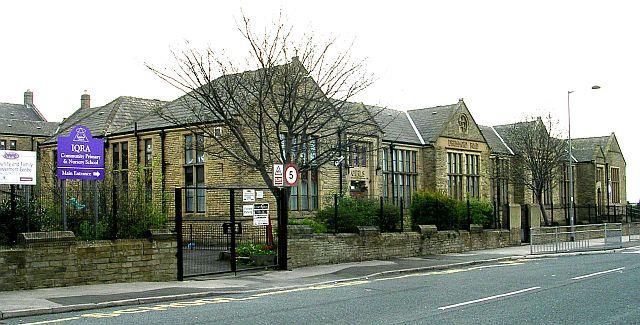 But fast forward 35 years; past the first Bradford Mela in 1988, past the riots of 1995 and 2001, past Lord Ouseley’s report on race relations, and past the year that Drummond Road Middle School became the IQRA academy. You can allow yourself some hope in the good things that happened along the way. And that hope becomes a bit more tangible when you take a look at the IQRA Academy’s website.

First of all, loud and proud, the academy describes itself as an “outstanding, multi-cultural school”. The “outstanding” comes from its latest Ofsted inspection. You can see what the multi-cultural part means when you read in the school’s last newsletter before lockdown that IQRA academy pupils will be broadcasting their poems and short stories to 84 countries via Royal Radio Bradford, and that Mrs Mehrin (6M teacher) recently won the Channel 4 cookery competition ‘Cooking up a Fortune’ with her Bangladeshi specialities . My favourite is Musa from Dewsbury who won a bronze medal in the international Sambo competition in Berlin last November. An Asian boy from West Yorkshire, competing in Germany in a sport that originated in Russia; the readers of the Salisbury Review would be choking on their pipe tobacco!

Education and multi-culturalism are not opposites but part of the same thing; part of understanding, valuing and being confident in the world around you. To see them synthesised in a Victorian school in inner city Bradford, in a place that was once the epicentre of a row about multi-culturalism, says that things can get better. But it won’t be a given.

Tackling racism on campus: Raising awareness and creating the conditions for confident conversations is a project funded by the SFC to tackle racism in Scotland’s colleges and universities.

Advance HE is inviting expressions of interest for research into online racial harassment. Find out more and apply by 23 September.