"...These awards recognise the improvements made by our third level institutions across the country..." Simon Harris TD, Minister for Further and Higher Education, Research, Innovation and Science.

Seventeen new Athena Swan Ireland awards have been conferred, taking the total number of awards in Ireland to 114.

New awards conferred in the latest round of results include the first applicants on the new charter framework launched at the end of 2021.

University of Galway School of Engineering achieved the second Silver award in Ireland with impact including:

Dún Laoghaire Institute of Art, Design and Technology (IADT) is awarded the first institutional Bronze on the new framework. Good practice in the successful application included:

Simon Harris TD, Minister for Further and Higher Education, Research, Innovation and Science, said, “My Department is determined to create a more inclusive, diverse third level sector. These awards recognise the improvements made by our third level institutions across the country.

“It is particularly encouraging to see the new institutional Bronze for IADT and a fantastic achievement for Ollscoil na Gaillimhe – University of Galway as the recipient of the second Silver award in Ireland.

“Together, we must continue to work together to provide leadership, advocate equality and respect for all, support inclusive learnings and promote female leadership in academia and research.”

Sarah Fink, Head of Athena Swan Ireland, said, “I am delighted to see applicants engaging successfully with the updated charter framework. The new charter was developed in response to a consultation with the sector and I look forward to supporting applicants on their equality journey.”

Dr Ross Woods, Senior Manager at the Higher Education Authority’s Centre of Excellence for EDI, said “It is wonderful to see the positive impact of Athena Swan in Irish institutions alongside other gender equality initiatives like the SALI posts and gender equality enhancement fund. Well done to all 14 new award holders for their commitment to gender equality in HE.” 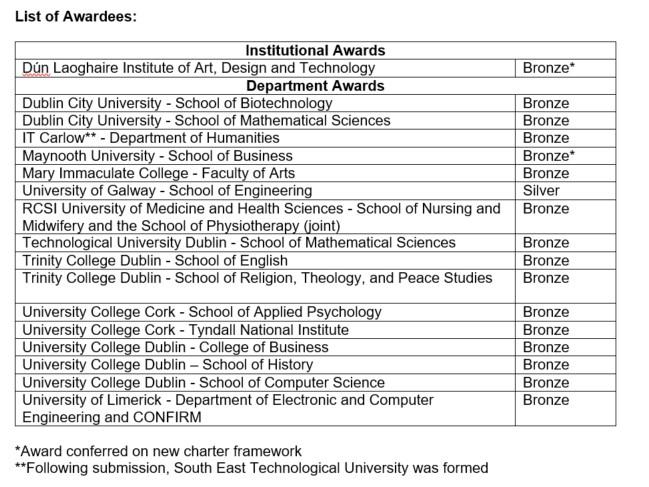