Day One at the Teaching and Learning Conference 2021

On the opening day of Advance HE’s flagship Teaching and Learning Conference 2021, Advance HE CEO Alison Johns introduced keynote speaker Prof Janice Kay, CBE, Provost and Senior Deputy Vice-Chancellor at the University of Exeter and Advance HE Board member, and encouraged everyone to ‘get networking!’

She said that as HE transitions into a world of hybrid and blended learning models, the student body must be listened to: “Nevermore have we needed to get together to talk about the curriculum in HE. That very rapid move to virtual teaching last year has given everybody a view on what the student experience should be. One of the groups we need to get the views of more is the students.

“Many of the topics are topics we have discussed in the past but they have a very different context now. For those who thought we might transition fully online, that has been given a resounding thumbs down from students.”

She then introduced Advance HE’s new networking platform Topia, and urged everyone to log in, talk to colleagues and share ideas.

“I wish you all a fabulous conference, and I wish that you all go away with new ideas and something to try when you return to your institutions.”

@AdvanceHE teaching & learning conference is just amazing 🤩. It’s heartening to see an excellent range of presentations & conversations about race equality in curricula at a mainstream T& L conference - Hoping for some tangible follow up impactful actions, at scale in the sector

Thoroughly enjoyed talking about my research today at the @AdvanceHE #TLConf21 A great conference which has showcased exceptional pedagogical work in the field of inclusion and diversity. #advanceHE #inclusion #diversity pic.twitter.com/tbrAEm3d0Z

She then introduced Prof Janice Kay who spoke about the work Exeter has done to move towards a blended learning experience that students feel provides value and supports their mental wellbeing.

Janice said: “I’m only sorry that we’re not able to meet in person but in a way that feeds in to what I want to talk about. My argument is that we are undergoing transformational change in the provision of HE. We are moving towards a model of blended or hybrid learning.

“Universities regard themselves as forever institutions, meaning that change tends to happen incrementally rather than transformationally. MOOCs (Massive Open Online Courses) have often been old wine in new bottles, but we are now seeing flexible degree offers. We are going to see an explosion of these flexible offers in the future. The experiences of learning through the pandemic has led to a demand for flexible, anywhere access education but people still want a social experience in their education.”

She explained that massive progress and innovation had happened as a result of the pandemic, and the sector must harness that to develop effective models for the future.

“As a sector we have produced huge innovation, and we need to capture this and not lose it. We have learnt the hard way. The pandemic has forced us to change quickly. The summary of Exeter thinking is an education that is Greener, Healthier and Fairer. There are profound changes to how people want to study, but they want them to be bespoke, and mindful of social learning.” 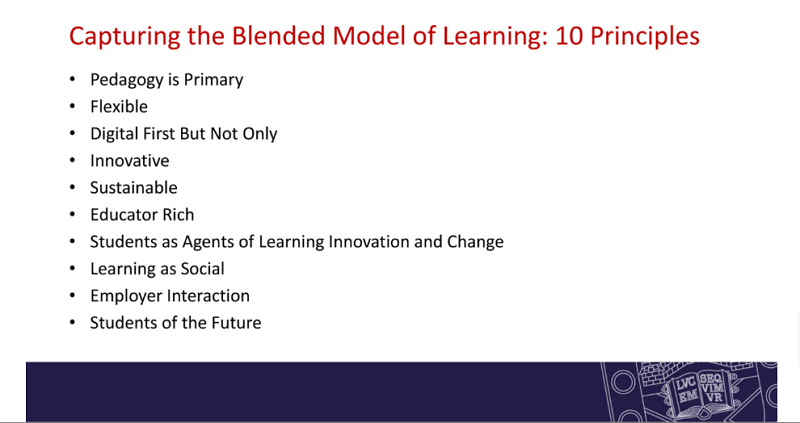 With the Greener, Healthier, Fairer mantra in mind, she gave an overview of the projects underway at the University of Exeter to develop a learning model that students feel works for them.

“The skills that students want to acquire, and those that employers want, are changing. Students will want to study at institutions that support their mental health. This is one example of what we mean by Healthier, Fairer education. We’ve also engaged with our students on sustainability. Climate change and environmental sustainability is our biggest area of research, so we have to be walking the walk. Greener, Healthier, Fairer.” 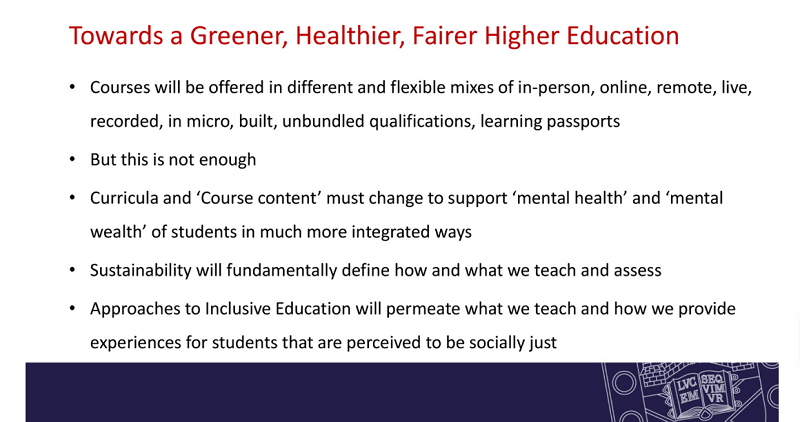 Other sessions throughout the day included a practical workshop from Dr Karen Lipsedge of Kingston University on exploring race, culture and identity through literature. She discussed The Kingston University Reading Group as a means of facilitating discussion on culture and identity to promote race equality and demonstrated how this approach can foster a sense of community in students while also equipping them with the knowledge to have effective conversations on race.

There was also a presentation on decolonising the curriculum at De Montfort University, an introduction of the ‘sandpit’ model for BAME success, the importance of student-centred learning in the remote learning environment and a look at the advantages of practice-based learning as a means to bridge the gap between employment and education.

As ever at Advance HE’s online conferences, there were also numerous on demand sessions for delegates to access as and when they chose, with presentations on topics as diverse as sustainable development, Active Digital Design and addressing the degree awarding gap for Black students.

The final session of the day was a panel session chaired by Melanie Smith of Advance HE and featuring Dr Kathy-Ann Fletcher of Abertay University, Aishwarya Tiku, Vice-President Education at University of the West of Scotland (UWS) Student Union and Dr Anil Awesti of the University of Warwick, who discussed why we should embed race equality in all curricula in HE.

Melanie, who works on the Scottish Anti-Racism Project for Advance HE, said: “The short answer to the question is ‘why wouldn’t we?’ although I appreciate that might be a bit facetious. In Scotland there isn’t that much diversity and for some people that means it doesn’t need to be talked about, but to me that is why it is absolutely should be talked about.”

Kathy-Ann then said that explicit anti-racism should be the ‘basic requirement’ for an education provider and that decolonising the curriculum is just the start of that process.

“I firmly believe in the value of us all living an anti-racist life. An anti racist culture is something that needs all stakeholders to take an active role in. Considering the role that HE has in guiding the disciplinary practice of students, it must be explicitly anti-racist.”

As a current student, Aishwarya gave a student perspective on the curriculum and said that student voices must be listened to when developing the curriculum.

She said: “Being here as an international student has been extremely thought provoking. The student voice is not always heard but I have been given numerous opportunities to rewrite the curriculum. There are so many things we could embed differently, how are we preparing our future leaders for a sustainable, peaceful environment?”

Anil then said that while decolonising the curriculum is important, we need to go much further and decolonise institutions, if we are to remove the systemic racism that minority ethnic people experience.

He said: “I want to move on from bringing in minority ethnic authors and texts to the curriculum, as this is an openly reductionist approach to decolonising the curriculum. We also need to focus on how we teach, not just what we teach. It is as much about pedagogical approaches as it is curriculum content.

“But also, by focusing on the academic sphere, we fail to recognise the wider systemic racism that results in experience gaps for people of colour. Universities need decolonising rather than just the curriculum.”

Day Two at the Teaching and Learning Conference will focus on the future for student engagement and becoming a flexible practitioner, with the keynote speech being given by Salma Hussain, President of King's College London Students' Union.

Read the Day 2 summary here, and the Day 3 summary, about inclusive assessment and feedback approaches, here.

Download your copy of our new Teaching and Learning for Student Success in Higher Education events brochure for 2021–22. Celebrating best practice and development to support the achievement of sustainable teaching excellence. Book before 30 September for a 10% Early Bird discount on selected programmes and events.