16 May 2019 | Advance HE Tracking the impact of the Diversifying Leadership programme was commissioned by Advance HE to explore leadership development for black and minority ethnic staff in higher education.

Cracking the concrete ceiling: Tracking the impact of the Diversifying Leadership programme was commissioned by Advance HE to explore leadership development for black and minority ethnic staff in higher education. 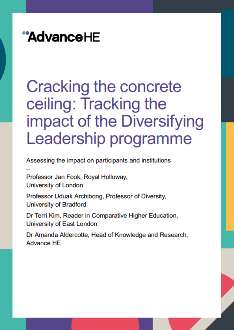 Download: Cracking the concrete ceiling: Tracking the impact of the Diversifying Leadership programme

The under-representation of black and minority ethnic (BME) staff in UK Higher Education (HE) is well documented, and there is an ethnicity pay gap in HE that is greater than the gender pay gap. Further, there are multiple reports of poor experiences of BME staff in HE, including accounts of bullying, aggressive behaviours, and a lack of support for career progression. While there is a drive to address these issues with a number of relevant suggestions, policies and programmes, there has so far been little evaluation of such interventions.

To address this, Advance HE (formerly the Leadership Foundation for Higher Education) commissioned a study to evaluate the impact of its Diversifying Leadership (DL) programme. The DL programme is aimed at early career academic or professional services staff from BME backgrounds who are planning a move into a senior role, or who aspire for a leadership role.
The impact of the DL programme was assessed regarding:

Two case studies were undertaken of higher education institutions (HEIs) to explore the impact of the DL programme on institutional context. Both institutions were examined at two time points, 12 months’ apart, through analysis of:

From the HESA staff records, both HEIs had a higher total proportion of BME staff compared to the national rate for both years, and showed a decrease in the proportion of BME staff with part-time contracts across the two years. However, both HEIs also had greater median and mean pay gaps compared to the national level. Respondents to the staff surveys for both HEIs indicated they had high self-ratings for their leadership abilities and their attitude to promotion and career strategies. However, based on survey responses and staff interviews, there were less positive perceptions of the institutional context, with a number of barriers to career progression and an underrepresentation of BME staff at senior levels noted for both HEIs.

Results from this study, therefore, indicate the DL programme is highly valued by its attendees, and there were some positive improvements in the BME staff profile over time in the case study HEIs. However, there were also stabilities and declines in the BME staff profile, and perceptions of staff in the two case study HEIs regarding the institutional context were often negative. These results highlight the importance of further evaluations of programmes to improve the experiences and career progression of BME staff in UK HE.

Tracking the impact of the Diversifying Leadership programme, full and summary reports, were published at the Advance HE BME Leadership Summit 2019 in Birmingham.