Longitudinal report highlights the impact of TMP HE

Advance HE’s TMP HE is a development programme for executive leaders in higher education which has been running in varying forms since 2000 and now has over 900 alumni, both in the UK and internationally.

In 2016, Advance HE commissioned researchers from Ulster University to conduct an independent longitudinal evaluation of the TMP. The evaluation tracked the impact of TMP on participants over time and measured whether the programme achieves its intended aims: to increase leaders’ self-awareness, leadership identity, confidence, competence and impact as an executive leader.

The evaluators used innovative methods including surveys, qualitative interviews and story-based evaluation, and used a comparator group to compare results with leaders who had not participated in the TMP programme.

The evaluators found that participation in TMP had clear positive developmental outcomes for participants, particularly in the longer-term as participants evolved their leadership building on the programme outcomes: 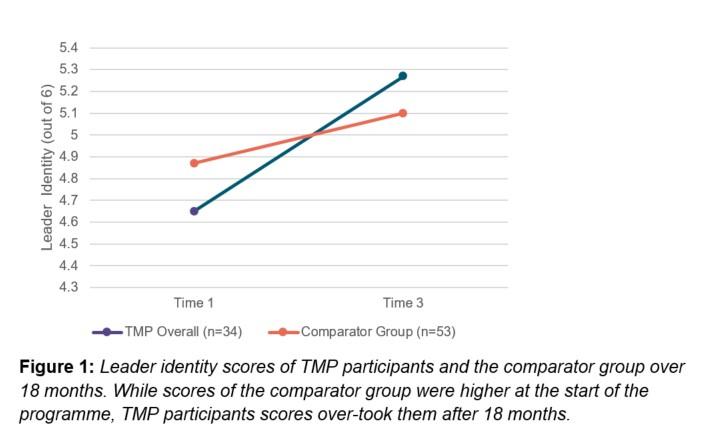 Elsewhere in the report the authors pointed to the in-depth interviews which clearly illustrated how alumni valued the impact of their TMP experience and how it provided: “opportunities to critically reflect, with support from coaches and peers, and how an environment conducive to supporting clear introspective learning was created.” (Report authors)

The report authors also emphasised that one of the most useful aspects of the programme was its ability to bring participants from a range of different backgrounds and leadership roles together and provide a forum to make collective sense of the increasingly complex issues faced by senior leaders in HE. They noted how virtually all interviewees extoled the power of the impact groups formed during the programme, and how these small action learning style groups acted as a catalyst for enhanced learning and development. Linked to this, another strong finding was the beneficial nature of the connections made during the programme and how they helped to reinvigorate networks and erode feelings of isolation, which is an increasingly common problem faced by leaders when they move to more senior HE positions.

When the evaluators delved deeper into these issues, they found that impact groups presented alumni with a ‘safe space’ to discuss and confront complex and wicked problems and to test out potential solutions amongst supportive peers and facilitators. When data from qualitative interviews was analysed, it became increasingly clear, that finding such a safe and secure place was vitally important for leaders who often work in messy and politically charged environments. Comments made by alumni also showed that having the opportunity to interact with like-minded leaders in the sector or ‘test stuff out with peers’ as well as ‘step back and look at what happens in other universities in another environment’ was extremely beneficial.

The researchers felt that two quotes illustrated the most salient themes emerging from this study, linked to introspection and how TMP creates and nurtures enduring communities of practice amongst its alumni. The authors felt that these observations illustrate why TMP is viewed as such an impactful programme by HE leaders:

“It’s more than just your average leadership programme, I think it develops a sense of community about leaders and leaders to be, and it also helps you to develop a much greater sense of self and of identity as a leader.” (TMP Alumni)

“… it was an opportunity to compare approaches, my values base with other people and recognise commonality but also to better appreciate where I was different and the strengths and weaknesses of that”. (TMP Alumni)

Tracy Bell-Reeves, Advance HE Director, Programmes and Events Advance HE, said, “It’s extremely important to have had independent validation of our TMP HE programme and I am delighted that this report highlights its positive impact.

“In a hugely demanding and complex HE and political landscape, it is vital that leaders have the opportunity to understand their leadership identity, to become more confident and forward thinking as an executive leader, responding to challenges with agility and innovation, while at the same time bringing their people with them. This study shows that TMP HE gives its participants a significant and sustained head-start in that process.”

Commenting on the report from an institutional perspective, Professor Peter Mathieson, Principal and Vice-Chancellor, the University of Edinburgh – who is an alumnus of TMP in 2011 – said, “As the sector faces ever increasing challenges, we need leaders equipped to make the right choices and take our institutions forward with confidence and foresight. TMP offers a robust platform to develop those skills and attributes.”

To find out more about the evaluation, results of outcomes and impacts following participation, and methods used by the research team, see the full report and executive summary.

Registrations of interest for TMP HE 48, starting in January 2022 can be submitted here.

Find about more about TMP HE in this video recorded by the Programme Directors, Louisa Hardman and Robin Ryde.