Shared parental leave — an opportunity to share the joy but what about the risks?

12 Jun 2020 | Clare Matysova Clare Matysova, Equality, Diversity and Inclusion Manager, London School of Hygiene and Tropical Medicine was to have presented her thoughts at our EDI conference: we’re very pleased that she’s put ‘pen to paper’ instead…

Pregnancy, while amazing, can also be fraught with anxiety. This is the case now more than ever. In addition to Covid-19 related health concerns (especially for Black and minoritised ethnic women), anxieties relate to financial and employment insecurities as well as wellbeing in a context of potentially increased isolation. These concerns have been echoed in recent discussions I have had with expectant parents for research on decision-making around taking time off work, shared parenting and what influences parents deciding to share time off, or not. While sharing of care has been a hot topic within Covid-19 coverage, the recent five-year anniversary of Shared Parental Leave (SPL) in the UK was largely hidden. But how will this unprecedented and unpredictable pandemic context impact decision-making about time off work – for both expectant mums and dads? And are employers, the focus here universities, being as supportive as they could be? 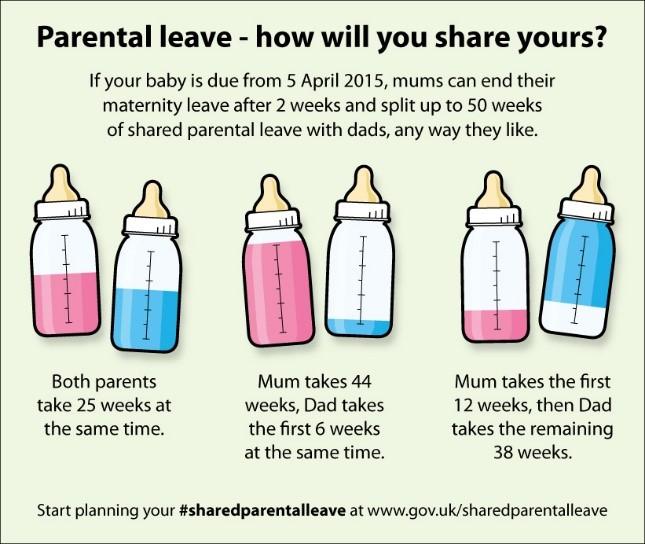 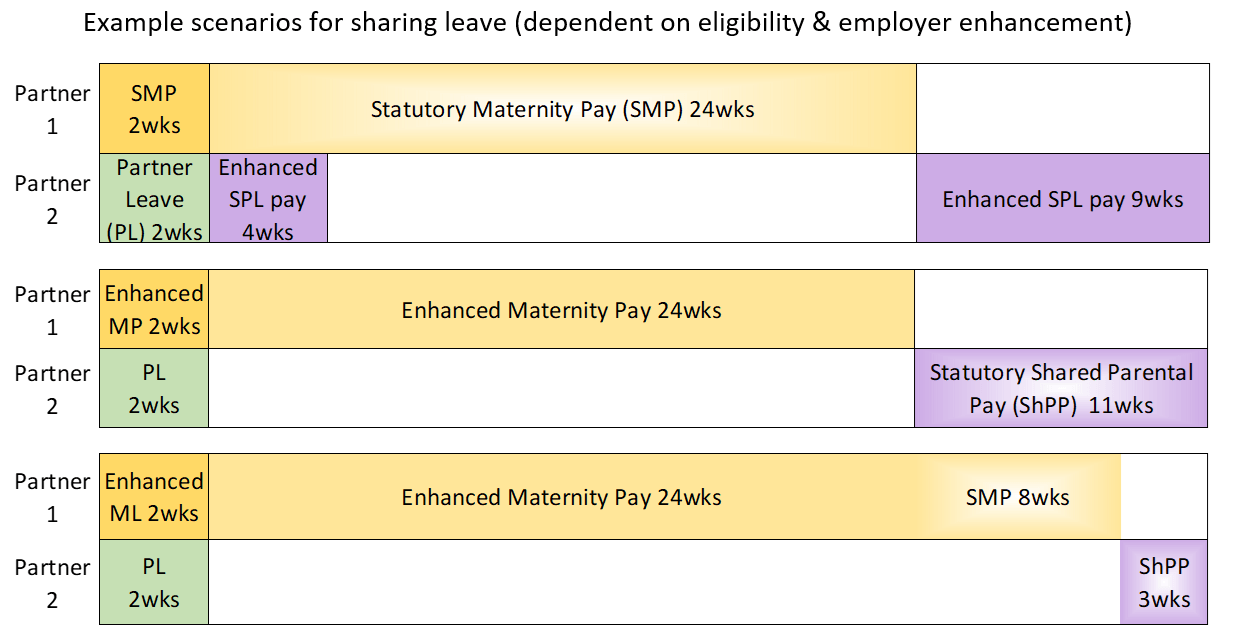 SPL, which provides the 'opportunity' for parents to share up to 50 weeks leave, has the potential to reduce the impact of maternity leave on women's careers as well as create opportunities for fathers to engage more with their children. However, the opportunity has been taken up by comparatively few parents. This low uptake of SPL is often attributed to parental choice, for example women not wanting to share their leave, as well as to financial barriers. Further, concerns over the potential impact on fathers’ careers, isolation of dads on leave, lack of awareness and complexity of the policy are also presented as explanatory factors. Financial barriers relate to eligibility, to higher statutory maternity pay (for the first 6 weeks of 37 weeks paid leave) and, further, because any employer enhanced maternity pay does not legally have to be matched for SPL pay. In reality, workplace parental leave policies vary considerably, and while some employers do, many do not enhance pay above the statutory entitlement for maternity or SPL. Higher education is an interesting sector to reflect on in this respect. Many universities offer relatively good financial incentives for SPL as well as maternity. In a survey undertaken in 2016 by the Universities and Colleges Employers Association, 65% of responding institutions offer enhanced SPL, of which 92% were matching maternity pay. However, take up has remained low in the sector.

Discussion on parental choice often assumes decision outcomes reflect parents’ preferences based on access to full information and resources. However, in reality, there are many unknowns and constraints, decision-making is much more fluid and the influence of gendered parenting norms persist. Parental leave decisions are being made in the context of persistent gendered parenting norms, as well as what might be viewed as the more objective factors relating to finance or rational economic choice. Despite being outwardly liberal in the UK, underlying traditional attitudes to parenting result in dissonance for women between the realities of work and caring responsibilities. While there is now less public support for the male breadwinner model, there is still a continuing expectation for women of young children to work part time or not at all in the UK.

Research on what works in other countries has underpinned various calls to change SPL policy in the UK; focused on matching enhanced maternity pay and increasing non-transferable leave specifically allocated to fathers, neither of which are likely to be considered by our government in the near future. Meanwhile, in addition to an employers’ option to match enhanced pay, evidence of continuing gendered parenting assumptions about who cares in the workplace reflects the employers important role as policy ‘gatekeepers’ in changing workplace culture. How leave options are communicated and how carers are supported all contribute and influence an individual’s ‘sense of entitlement’.

Some employers have proactively led the way in encouraging sharing of leave, both in terms of financial incentives and culture change. The UK insurance company, Aviva, witnessed a 23% increase in the two years following their introduction of full pay to parents for six months irrespective of gender in 2017. The financial change went alongside a communications campaign promoting leave options. However, despite the Government Equalities Office recommendations for employers to encourage uptake of SPL as part of a broader strategy to tackle the gender pay gap, this generally remains underused. Reflecting on the university sector, notwithstanding the relatively high proportion of universities matching enhanced maternity pay, a review of institutional Athena SWAN gender equality action plans suggests this as tokenistic with limited university-led proactive action to increase take up. This may reflect research on caring responsibilities in the sector more broadly which suggests that a working culture that often renders care work is invisible.

Discussions that I have had with expectant / new parents who work for universities as part of my research, or their partners, have highlighted the lack of proactive messaging, to both expectant mums and dads, and the impact of this.

"none of the maternity paperwork I've completed even mentions SPL. I work for a big university, not a small local business. I would expect that for anyone enquiring about leave (male or female) the least they could do would be just to advertise the options open to people"

The potential impact on careers of both mums and dads is often cited by participants. There are examples of more proactive universities, such as University of Edinburgh, where increased entitlements have gone hand in hand with more accessible guidance, staff engagement and communications, leading to increased take up. 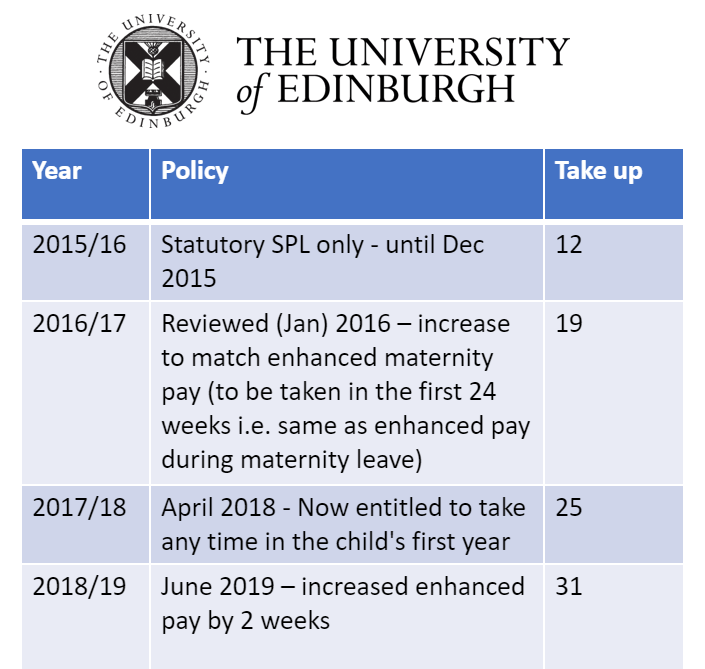 However, many participants report nervousness when it comes to initiating discussions with managers about leave planning, especially for those on precarious contracts. A culture that does not encourage dads to take leave also impacts on mums and results in concerns about risk to employment security and career progression. Perhaps the governments ‘Share the joy’ campaign was a little misleading in not referring to also sharing the risks?

These issues are just as, or perhaps even more, pertinent in the current Covid-19 pandemic where care work has become more visible in the employment context alongside increased economic uncertainties. The shift in childcare from paid to unpaid has resulted in women disproportionally picking up the extra childcare and being 23% more likely to have lost their job . As with the low take up of SPL, this has been attributed to family economic decision-making and women’s jobs being considered lower priority. Of course, financial concerns are a considerable factor and even more so in these uncertain times. But are there similar narratives in the pandemic circumstances that mums should prioritise childcare over work – in a way that is not the case for dads? Debates on whether we put a ‘pause‘ on gender parity or attempt to stop the Covid-19 lockdown reinforcing sexist gender roles also impacts upon parental leave planning. On a more hopeful note, whilst most media coverage suggests a disproportionate impact on women, there are also stories of dads taking on increased caring and home-schooling responsibilities during this Covid-19 crisis, as well as the potential shift in employer perception on flexible working. Could these potential shifts lead to expectant / parents’ reassessing their leave planning, as well as negotiating flexible working on return from leave? Will this increased visibility of care, in theory for both mums and dads, encourage more dads to take more time off and will employers (in the HE context, championed by Athena SWAN led initiatives) take up the opportunity to proactively support them? 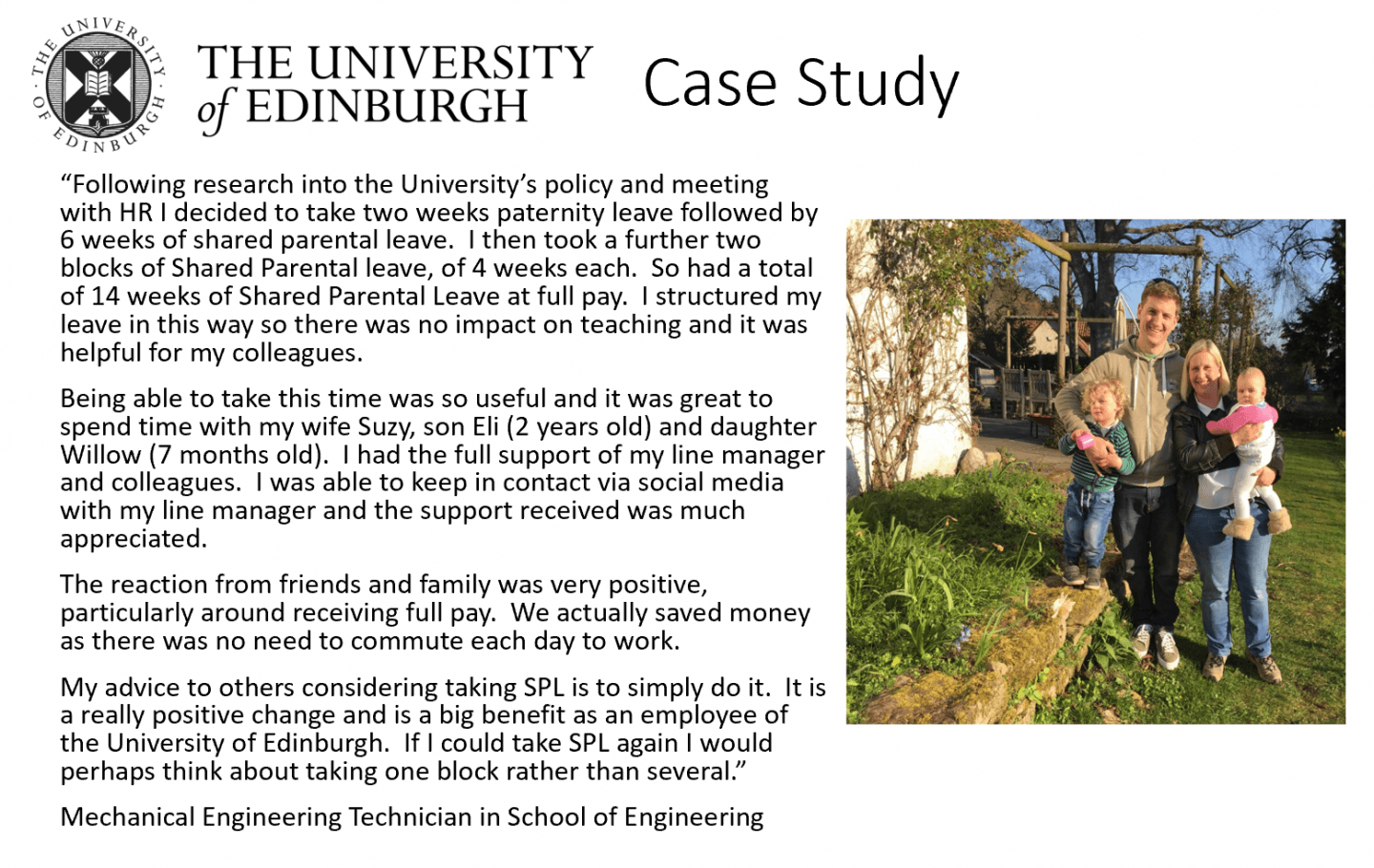 Clare Matysova has been working in EDI related roles within HE for the past 12 years. Working at the University of East London for the five years, she was responsible for project managing the institution’s successful Athena SWAN and Race Equality submissions, supporting departments with their approach to EDI and Athena SWAN as well as various other initiatives such as tackling bullying and harassment both in staff and student contexts.

Previously,Clare worked at the University for the Creative Arts as Disability Support Services Manager and was responsible for managing a number of cross disciplinary inclusivity and equality related projects. She is also a PhD researcher at the University of Leeds focusing gender equality and exploring the impact of the UK’s shared parental leave policy from the perspective of couple’s decision-making.

Find out more about Advance HE's work in Equality Diversity and Inclusion, and in the common issues in further and higher education to design inclusive support services, develop accessible campus environments and make everyone feel welcome at your institution.