The Hard Facts of Soft Skills

14 Jan 2019 | Jonathan Neves How UKES can be used to track and benchmark student skills development internationally.

How UKES can be used to track and benchmark student skills development internationally.

With the debate on workplace skills , and the role of universities in helping students to develop skills –  particularly ‘soft skills’ - firmly in the spotlight, the time is right to consider the role of the UK Engagement Survey (UKES) as a tool for benchmarking student skills development and examining how the UK compares internationally. Because student engagement surveys run in a number of other countries and because they largely use the same questions, this makes an international comparison possible.

Earlier this month, the Confederation of British Industry published its annual education and skills report, providing a detailed analysis of the perceptions of some 28,000 employers, of the UK education system. With the vast majority either maintaining or increasing levels of graduate recruitment year-on-year, it was asserted that businesses clearly valued UK higher education.

These findings chime with those in the ‘Global Skills Gap in the 21st Century’ report published in October by QS in association with the Institute of Student Employers. Examining the relationship between the expectations of employers worldwide and the skills of graduates, the report found that, ‘across the globe, problem-solving, the ability to work in a team, and communication, are considered to be the most important skills. ‘(QS, 2018). The good news is that the skills sought by UK employers are seemingly well aligned with what universities provide.

Nevertheless, both the QS and CBI reports as well as the UK Government in its  ‘Industrial Strategy: Building a Britain fit for the future’ (November 2017), suggest that there is room for improvement so that our graduates can continue to thrive in the world of work, developing the right attitudes, technical and subject-specific skills as well as so-called ‘soft skills’.

As we usher in the ‘4th Industrial Revolution’ and prepare for the UK’s imminent departure from the European Union, the focus on skills development in the workplace, and in particular the demand for soft (or transferable) skills such as those highlighted in the QS report, has perhaps never been higher.

Beyond the technical and subject-specific skills acquired during the course of a degree, what soft skills can students bring to the table? Are they the right ones from an employer’s perspective and how do different HE systems compare in this respect? The UK Engagement Survey (UKES), offering rich insights into how undergraduate students engage with their studies, how they spend their time, and how they develop their skills accordingly, provides many of the answers.

UKES was developed under license from the National Survey of Student Engagement (NSSE) in the United States and based on a similar set of questions. Some half a million students from more than 500 institutions participate in NSSE annually. It runs in Canada too, while in Ireland, the ISSE, based on a similar question set was piloted nationally in 2013 and has run every year since. Further student engagement surveys either operate currently or have previously run in South Africa, China and Australia.

In late November 2018, Advance HE hosted a UKES 2018 webinar at which I presented the overall findings from the survey. The webinar explained that ‘the extent to which students report development of skills has remained consistent over time’ (UKES, 2018) with very little change between the headline figures in 2016, 2017 and 2018, as illustrated in the chart below. 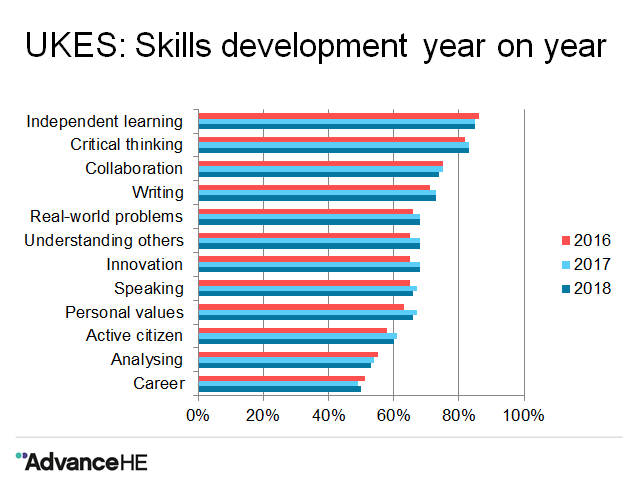 While a national benchmark and being able to track and compare results within the UK year-on-year, as per the Skills Development chart above, is a powerful tool in itself, there is no doubt that an international benchmark is of even greater interest and value.  To illustrate this potential for international benchmarking, I have looked at the items in the survey covering skills development and compared the results from UKES 2017 and 2018 with those for Ireland’s ISSE 2017 and NSSE 2017 in the US and Canada (Canada combines the results for NSSE 2016 and 2017). 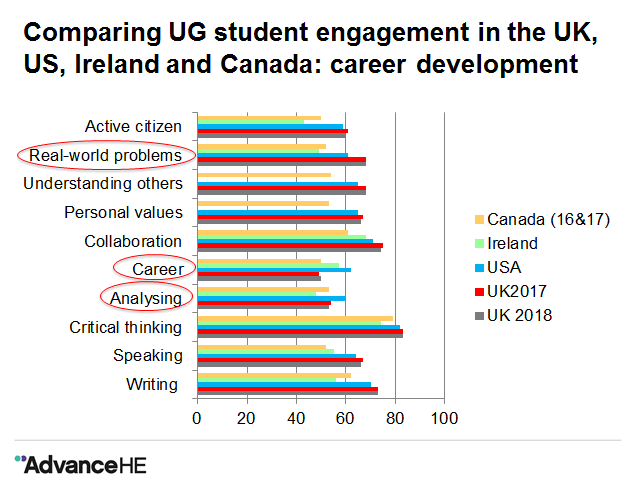 This rudimentary comparison indicates that across the board, UK students compare favourably with their US, Canadian and Irish counterparts, particularly in terms of soft skills, when one examines how positively UK students are reporting their development of the skills listed in the chart above.  Such findings are consistent with Universities UK‘s ‘Solving Future Skills Challenges’ (2018) report which found that ‘those graduating from higher education courses tend to have high levels of transferable skills and their and employer satisfaction with these tends to be high.’

In particular in the area of exploring complex real-world problems, UK students lead the way. In terms of analysing numerical and statistical information and acquiring employability skills (‘e.g. skills to help you get a job such as CV writing or career planning’), however, US students report greater development, while Canadian students feel they are more informed and active citizens.

I emphasise that this exercise is purely illustrative and it is important to consider the different contexts in which the engagement surveys are run across the world. In the UK, for instance, roughly 20% of HE institutions participate annually whereas in Ireland, the majority of institutions take part.  There also appears to be a larger proportion of first year students completing UKES compared to NSSE respondents in the USA and this is likely to have an impact on how students report their perceptions of skills development.

While I have advocated for the role of UKES in providing an international benchmark of student skills development, it is worth pointing out that the survey doesn’t only cover skills development. There are two other main sections; engagement and time spent on activities. This means that while, understandably, there is intense focus on skills, employer needs and equipping graduates for the world of work, it is equally feasible to use UKES alongside other student engagement surveys to compare HE systems across the world more broadly.