Advance HE members benefit from discounted event prices. To see the price of this event for your institution please select from the list below.
Non-subscriber: £235
Advance HE Member: £175
Book Now

My Advance HE booking portal

Please note from 3 September 2020 we introduced My Advance HE, our new customer portal, which includes event bookings. My Advance HE has replaced My LF and My Academy. When booking events on your first visit to My Advance HE you will need to go through the sign up process to activate your account.

Secretaries and Clerks are pivotal to board success. This event provides those new and continuing in the role an opportunity to work together on issues critical for their own professional contribution and that of their governors.

Governing bodies and senior management teams depend on professional staff, including Clerks and Secretaries to manage the changes required to meet the needs of an evolving operating environment. The meeting of the national network of governance professionals brings together these individuals, who are often expected to inform and advise governing bodies on changes affecting their roles and responsibilities.

This annual networking event is organised in partnership with the  Association of Heads of University Administration (AHUA) and will consist of presentations from leading figures in governance.

The event will also explore a range of other topics such as:
•    Issues of higher education governance that have emerged over the last 12 months and remain challenging, and scenarios for the future shape of the higher education sector.
•    Lessons to be learned from what has happened in governance in other sectors over the last year.
•    Lessons from effectiveness reviews.
•    Approaches to supporting the induction and professional development of governing body members.
•    Keeping abreast of new developments and responsibilities for governing bodies (including academic governance)
•    Managing relationships, both on the governing body and in the institution. 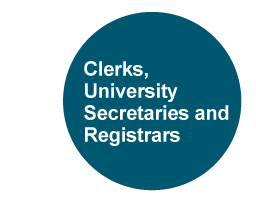 11.15am - Panel of Chairs - Higher education governance - the challenges that lie ahead and what can we do about it

12.20pm - Lessons learned from remote governance during covid - perspectives from a Secretary, SU President and Governor

Aaron Porter is the Associate Director (Governance) for Advance HE leading on engagement with governing bodies and governance across the UK, including leading reviews of board effectiveness. He has worked with over 75 universities both in the UK and overseas, as well as projects for national governments focused on higher education. His portfolio of roles includes Director of Insights for the Hotcourses Group and as an external adviser to Civitas Learning. He is a member of the governing council at Goldsmiths, University of London and is Chair of the Board of Governance at Nelson College, a specialist higher education college in East London.

He has previously served on the council of the University of Leicester, and the boards of a number of higher education sector bodies including Higher Education Funding Council for England, Universities and Colleges Admissions Service, the Higher Education Academy and the Office of the Independent Adjudicator.

He was previously President of the National Union of Students in 2010-11, during the high profile debate on tuition fees. He also co-chaired the Beer/Porter Student Charter group which reported to the Higher Education Minister, David Willets, in January 2011.

Previously, Diana served as Head of Government Affairs at the University of Warwick and Policy Adviser to the last three UK Universities and Science Ministers. She was also the first Director of Policy and Advocacy at the Higher Education Policy Institute (HEPI).

Jane Hamilton has 25 years of experience at a senior executive level in major global banks, investment management and property corporations across multiple geographies.

She is currently a non-executive director of the Government Property Agency, and Walberswick Car Parks Limited as well as a coach to developing executives. From 2015 to 2019 she was also on the Board of Trustees of the Institute of Cancer Research. Prior to these appointments, she was the European Head of Corporate Real Estate for HSBC.

Before moving to the United Kingdom in 2009, Jane lived in Australia and held the roles of Global Head of Corporate Real Estate for ANZ Bank, Managing Director of Commercial and Industrial Management at AMP Henderson Global Investors as well as senior property leadership roles with Jones Lang LaSalle and Lend Lease Corporation.

Dr Roberta Blackman-Woods, Chair of the Board of Governors, Northumbria University

Roberta  has recently stepped down as a Member of Parliament, having been the MP for the City of Durham since 2005.  During her time in parliament Roberta served as a Deputy Minister  in the Department for Innovation, Universities and Skills, and the Department for Business, Innovation and Skills, where she was involved in shaping higher education policy.  Since 2010 she has been the Shadow Minister for Housing, Planning and Local Government.

Roberta helped establish the Westminster Higher Education Forum and the Higher Education Commission and has chaired the Parliamentary University Group for several years, a forum where Vice-Chancellors and other senior university officers discuss policy and strategic issues with parliamentarians and ministers.

Her career before entering parliament included working in social services at Newcastle City Council and as a social policy academic at the University of Ulster and the University of Newcastle. She was Dean of Social and Labour Studies at Ruskin College, Oxford and a Head of School and Associate Dean at Northumbria University.

Roberta has a strong belief in the power of universities not only to transform individual lives but transform communities and societies too. She believes the research, innovation and knowledge exchange they undertake are essential for the creation of new jobs and whole new sectors of the economy. She also greatly values the role universities play in educating  and growing leaders of the future.