Project leader / s: Professor Claire Taylor
The project is an evaluation of the effectiveness of new distributed arrangements for academic development established at Wrexham Glyndŵr University from September 2016, following the closure of its central educational development centre in 2014. The new arrangements comprise a core Academic Development Team (four individuals each with substantive roles for learning and teaching in the Academic Schools, plus the Deputy Vice-Chancellor), supported from September 2017 by a new network of Academic Development Team Associates. This initiative has been supporting major organisational change in learning and teaching through embedding a transformational (rather than transactional) leadership network across the organisation, using the principles of Kotter’s[1] (2014) dual operating system approach. Kotter advocates a move away from the traditional regulated hierarchy of management and a move to using an agile and innovative network made of volunteers organised in small project teams who are fully empowered within their project focus. The agile network gets on with innovative change projects, operating alongside the traditional management structure that ensures that day-to-day ‘business as usual’ happens.
Research themes: Organisational development, Positive cultural and behavioural change 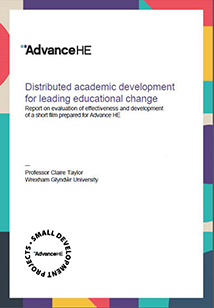