Athena Swan - why we do it at UCL

The LMCB became aware of Athena Swan in 2008 and used the process of chartering for an award as a way to examine gender equality in the department objectively. We received our first award (Silver) in 2009, reflecting good practice that was already in place, and committing to a plan for future action. We renewed Silver in 2012. Engaging this early meant that we were working out what it was all about at the same time as preparing submissions and devising our next action plan. There was a lot of sharing and learning from others at UCL and throughout the UK; successful new awards were consulted to provide examples of current good practice and new ideas to try. As time progressed, what was once considered novel good practice became the expected norm.

We want to be the best we could be – whether in our scientific research or our working culture. We attended workshops, perused successful Gold applications, and visited early Gold departments (thanks University of York Chemistry and Biology Departments). We also had the advantage of our size – around 100-120 people. This is small enough to nurture a good sense of community which meant our surveys and activities were well received, and large enough for variety and to measure impact.

Some activities and attributes increased our awareness and ensured progress. The first was understanding that changing culture takes time but can be broken down into stages. We used Kotter’s established 8 step scheme (others are available), and spent time ensuring that we fulfilled each step, and eventually repeatedly cycling through the last few steps if something had not worked and as we tackled new inequalities that we became aware of.

The second was hitting on a vision that was so simple that everyone understood it even if they did not know anything about gender quality or equity or chartering. Our vision and mantra, adopted ~2015, is still #simplygoodpractice. We followed the evidence – whether quantitative or qualitative – and devised actions to change anything that was not supporting equality or best practice. Importantly, we found that as we improved things for those who were under-represented, we improved things for everyone, although of course those who were disadvantaged benefitted more.

The third was being strategic about beaconing and innovation. We were enthusiastic about improving things, and wanted to share our experiences and good practice with others – so we did this very deliberately, and took every opportunity to share the impact and culture change at the LMCB with other departments and faculties at UCL, and giving talks at other universities and institutes. This recognition by others meant we kept pushing forward. We were also very keen to think differently, try new things and assess their impact.

The fourth was having a team that were committed and incredibly enthusiastic – in the early years we were volunteers, working through our lunch breaks to do what we did. It was hard work but real fun to work together and see the change year on year, and we all learnt a lot.

These activities and attributes underpinned our work and ensured that we made steady progress. We were awarded Gold in 2016, the first department at UCL to be recognised at this level. 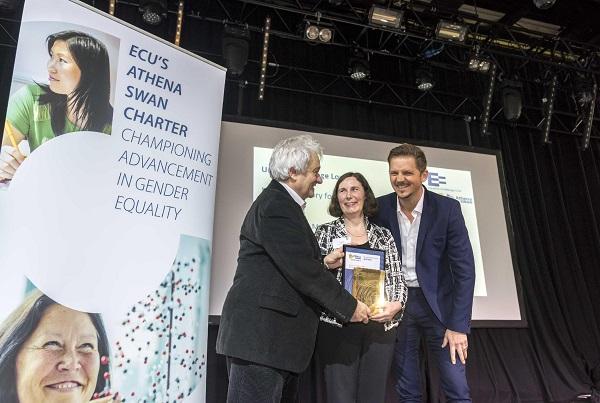 Receiving the Gold award with my co-Chair from Sir Paul Nurse, Athena SWAN Patron, in 2016

In recent years we have really enjoyed pushing at the boundaries to deliver equity. We have continued to do innovative work (such as Life of P.I.) and our expanding network led to new interactions and work with international partners. We renewed Gold in 2020 and have an ambitious action plan to keep us moving forward, with gender equality now just one part of our Equality, Diversity and Inclusion work as a department. 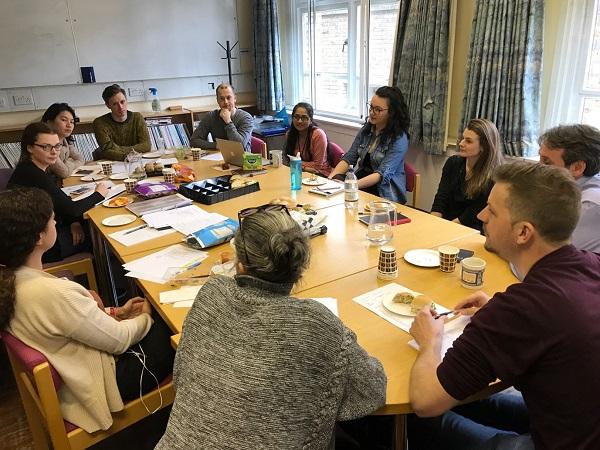 Early on, we chose to deliberately model what we were trying to achieve – so the first Chair (me) invited a male co-Chair (both academics in the pre-2015 world). We shared the work, and ensured that the committee was gender balanced and represented all types of employees and students in the LMCB, as well as eventually covering as many other protected characteristics as possible. Our long engagement also meant that within our faculty, when something was identified that needed improvement, we had often already demonstrated a solution. I have since handed over being ‘chief’ Chair to my co-Chair and a new female Chair was invited out of the existing committee. Prof Rob de Bruin and Dr Sophie Acton lead the department to the 2020 Gold award.

Out of the experience of leading the equality work in the LMCB I was competitively appointed UCL Provost’s Envoy for Gender Equality in 2018, which allows me to contribute to and influence gender equality work across UCL. Extending the principles of collaborative leadership used in the department, I set up the new UCL Gender Working group with three co-Chairs (to cover most protected characteristics as well as senior academic and professional support staff). Our work is still evolving, and we each have responsibility for part of it. We seek to work with and challenge senior management and the whole institution to advance and deliver UCL’s gender equality priorities. This includes participation in the Athena Swan charter, profiling and sharing good practice, resourcing initiatives, considering and addressing issues of multiple disadvantage, and championing necessary change. Co-operative leadership is challenging in that it requires more effort behind the scenes, but working to our strengths means that we make faster progress overall as well as sharing the workload, and it is more satisfying because again we have to model good practice.

UCL now has nearly 40 departmental Athena Swan awards, the most of any UK university, and including three Golds. Our departments have engaged at different times, with those engaging early generally showing the most progress. I support our central EDI team and work with the Athena Swan manager to lead on gender equality and its intersection with multiple disadvantage, especially race, strategically. UCL is a very collegial place. At the same time as we are supporting departments and local equity leaders to take their EDI work forwards at grass roots level, a further 75 people across UCL who are leading in EDI in their departments and faculties are also supporting their colleagues by reading drafts of Athena Swan applications.

Chartering for Athena Swan is of course time consuming, with its focus on gathering evidence and showing impact. Yet it can be transformative, for the department and for those engaged in leading on cultural change. Most importantly, it makes a difference. How will we know when we have achieved gender equality? When all have exactly the same opportunities, are free to make exactly the same choices; and that this was happening. #simplygoodpractice.

Sara Mole is Professor of Molecular Cell Biology at UCL where she leads research on Batten disease. She is also UCL Provost’s Envoy for Gender Equality. Working with UCL’s Athena Swan manager she supports UCL in its gender equality work, and Advance HE by serving on the Athena Swan Governance Committee.

Professor Mole is speaking at an online event for Athena Swan participants on 19 November. The event will look at the impact of Covid-19 on gender equality in the higher education and research sector. Prof Mole will share examples of what UCL did to tackle the challenge and support colleagues. Book your place here