29 May 2018 | Catherine (Cathie) Barnett is a senior research fellow in the Department of Archaeology at the University of Reading who took part in Aurora London in 2016-17. Following advice from a role model she decided to ask for a mentor outside of her discipline and was matched with Simon Chandler-Wilde, dean of diversity and inclusion and professor of applied mathematics at the University of Reading. Here they reflect on their relationship as mentee and mentor 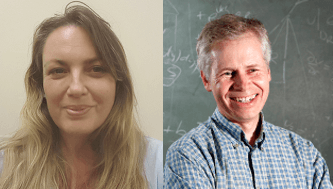 Firstly, tell us a little about yourself

My current role is split between archaeological science research and project management of a large Iron Age Landscape project named Silchester Environs. I also line manage an excellent team of archaeologists and specialists who work on a series of Silchester excavation and post-excavation projects, and report in turn to the Principal Investigator Prof. Mike Fulford.

I’m married to a land manager for the Wildlife Trust and we have 3 boisterous little boys so the outdoors features heavily in my life. They are wonderful and exhausting, so I’m fortunate to have negotiated an unusual working pattern which allows me to balance home life with them and still deliver on a busy work schedule.

Simon: I’ve worked in a number of universities – Bradford, Coventry, Brunel, and I joined Reading in 2003. In my role as dean for diversity and inclusion I job share with my colleague Professor Ellie Highwood, the rest of the time I am an academic. My role as dean is a fairly new university role which we took up 2 years ago.

I’m married – my wife has a senior role at Buckinghamshire New University – and have two daughters; one has just finished university and is now a journalist, the other is in her last year at school.

How did your approach the process of mentorship?

Simon: Cathie and I hadn’t met before, we were paired up by Susan Thornton, our Leadership and Talent Development Manager and Aurora Champion, and then we got in contact by email and had a first meet up. Helpfully we were provided with a pro forma that Cathie completed and we discussed, where Cathie wrote down what she hoped to get out of Aurora and having a mentor. This was really helpful to set the scene initially, and to refer back to in order to focus subsequent discussions.

We met four or five times, about monthly, from about Christmas through to May, meeting about an hour each time. There was no huge structure to the meetings, except that the initial pro forma provided a continuing point of reference, and that we would agree at most of these meetings follow-on actions that Cathie would report back on. Also, I continued to ask what had happened on the Aurora front since the previous meeting, and what outcomes/impact that had had. But we also talked about other things, for example we found out that Cathie was going on holiday in Shropshire just a few miles away from where I go for holiday most years, so we discussed holiday activities too!

My approach to being a mentor is to be interested, encouraging and supportive, and to ask open questions, to get a sense of my mentee’s environment, career, aspirations and issues that she/he wants to tackle. I’m also wanting to explore my mentee’s understanding of the next steps ahead, and to ask questions to expand that understanding. As a more experienced mentor I can make my mentee aware of possibilities, and how stuff works, that they just haven’t been exposed to. And it’s really satisfying to seek to build confidence, for example to challenge and support my mentee to have new conversations with colleagues in her environment.

Cathie: One tip given by one of the role models on the first Aurora day was to aim for a senior mentor outside your own department. Good advice!

Simon has been very encouraging and supportive, I’ve enjoyed our meetings and having another in the diary focuses my mind. I have found it particularly useful to talk to someone so familiar with the university procedures and who could take an objective view of how I fit in the system. I particularly value that he asked and let me find my way to answers rather than leading with advice straight away, it’s a lesson I’m going to try and apply when talking to colleagues and students myself.

Simon, what inspired you to become a mentor?

Simon: Firstly I’ve had great mentors myself, people senior to me who have offered advice, encouraged me to stretch myself, and acted as sounding boards. Secondly, in the leadership and people management roles I have had, for example as head of department and head of school, but also at a lower level, e.g. as line manager for research staff working for me, I’ve enjoyed supporting staff in their development. This has included: personal development reviews, supporting applications for promotion, for research grants, and for new jobs. I think it’s a really important part of our role as any sort of people manager to support the staff we work with and help them to grow and develop (and move up to the next level), and it’s a part of the job that gives me great satisfaction.

Has the mentoring relationship continued?

Cathie: Yes it has, both informally, I know Simon will be there with a listening ear and good advice if and when I need him, and we have a more formal follow-up meeting in the diary. He has also kept me informed of further leadership training which he felt I might be interested in, and which I recently took advantage of.

What has been your biggest learning from the process?

Cathie: I’ve learnt a great deal in our discussions and of course through Aurora as a whole. One of my key aims for doing this was to grow in confidence and to gain more of a voice. By nature I’m rather reticent, awkward and apologetic in putting myself forward in areas such as progression and promotion or in challenging ideas with senior colleagues, although I suspect my colleagues don’t realise it. Speaking with my mentor has helped me be a little braver, I have had conversations in the last 6 months I would have shied away from before and have had some really positive outcomes including further leadership training and setting objectives for further progression within the university. I’ve also learnt that there are gaps in the current system which, when discussed openly, the University are keen to tackle and that there’s a great deal of support and encouragement available if you ask.

Simon: I’ve been an Aurora mentor more than once, and certainly I have played a more informal role as mentor on many other occasions. But I am continuing to learn through practice, and continuing to gain confidence as a mentor. Regarding confidence, it is becoming clearer to me – but really this is pretty obvious – that having done a lot of different things in a lot of roles, and having held senior positions where you are forced to understand how the university (and universities generally) work, I do have a lot that I can pass on, and I am well-equipped to know the right questions to ask to get Cathie (and other mentees) reflecting on what they are doing and what might be possible in the future.

Cathie, have you ever been a mentor yourself and would you consider being one in the future?

I have been, and am now a line manager and try to be an advocate and to encourage my colleagues to take up learning opportunities, to stretch themselves and become more personally visible, but I have not been a mentor to someone beyond my immediate team. I would like to offer that in the future, and have recently let my department know I would be happy to contribute by acting as one. I have a better idea now of what would be useful to mentees having gone through the process myself and having had such a positive experience.

Cathie, what was the best piece of advice you received from your mentor?

I’ve had lots of great discussions with Simon but one of the key things I’ve taken from him has been to take stock, to stand back to look at all I have already achieved and how that has already equipped me for leadership roles. On a practical level, that has led to me recording everyday activities more often and considering how these tasks provide direct evidence for my capability in specific research and leadership areas key to progression.

Simon, what piece of advice would you give other aspiring women leaders?

My advice is to stretch and challenge yourself; to develop confidence through stretching yourself and trying new leadership roles; and to remember that the people more senior to you are only slightly (if at all) different, were at your level rather recently, and are much less confident (and competent) than they may come across.

Talk and ask questions about how everything works and what is possible. Get into the habit of saying: “I could do that”.

Finally, good employers should develop their staff and provides routes and opportunities for promotion and development and taking on new roles – and certainly universities are large enough organisations that this should be possible – but do think also about moving employers as a route to progression, and as a means to reinvent yourself. My own last move – 15 miles down the road from Brunel in 2003 – had a huge impact on my career.

And finally, do you have an inspiring woman leader, and if so, who?

Cathie: My primary female role model is an absolute cliché, being my mother. She retrained from being a GP to become a consultant psychiatrist while I was a toddler specifically so that she could take on part time roles and juggle home life with a successful and meaningful career. It taught me that it can be very healthy for children to see the women in their lives following their chosen profession without being absent. I hope I’m achieving the same balance with my boys.

Simon: There are many women that I’ve encountered who have inspired and impressed me, and that I’ve had the pleasure of working alongside, or working for them as my boss.

Let me kick off – maybe a good place to start– with my wife , Dr Rebecca Chandler-Wilde, who is director of Enterprise at Buckinghamshire New University. I admire her judgement, not least in managing people and relationships, her enthusiasm and sense of fun at work and can-do attitude – this coupled with a large dose of realism – and her attitudes to work-life balance, not least her scorn for presenteeism.

I admire hugely my job share Prof Ellie Highwood, who is a leader in her Dean role and, in the rest of her time, is an eminent climate physicist and President of the Royal Meteorological Society. Moreover she does this working part-time (about four days a week), and so is a great role model for flexible working arrangements at the highest levels.

I’m also a great fan, having contributed to her Wikipedia page, of another former President of the Royal Meteorological Society, Professor Dame Julia Slingo FRS, who until recently was the Met Office Chief Scientist, leading a team of many hundreds of first-rate scientists, developing some of the best weather and climate models in the world.

Find out more about Aurora here.